skip to main | skip to sidebar

Samantha Young is nine-years-old and has been wrestling eight-foot deadly reptiles since she was six.

Samantha's parents, Jay and Erin Young, own the Colorado Gators Reptile Park in the US and live surrounded by 350 of the beasts on their 12-acre farm.

"I have been wrestling alligators since I was six," Samantha said. "I was a bit scared at first but my dad was there and he always knows what to do with them."

"It's all about getting your balance and position on top of the gator's back so that you can control its mouth and neck," she added.

The Youngs began their alligator collection in 1987 and offer £70 classes to members of the public on how to tackle the predators.

"Samantha is very proficient with the gators and wrestles the size of alligator that we involve the public with," her father said. 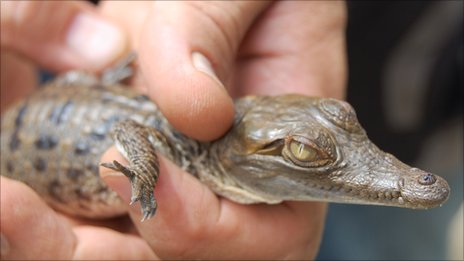 A privately-run breeding programme is aiming to conserve the Orinoco Crocodile
Young crocodiles cry plaintively for their mother as they are hooked in a trap and pulled, splashing frantically, from the water.

But their mother is nowhere to be seen.

These one-year-old Orinoco Crocodiles are part of a captive breeding programme designed to put the brakes on their slide towards extinction.

The Orinoco Crocodile (Crocodylus intermedius ) is the biggest in South America, present only in Venezuela and Colombia.

Researchers measure population by the number of adult females and say there are now around 100 in Venezuela, far fewer in Colombia.

"In the 1930s and 1940s they were over-exploited for their skin," said Omar Hernandez, director of Venezuela's Science Development Foundation.

"Now people are eating these crocodiles, they're hunting them for their meat."

The breeding programme, which each year sees around 200 young crocodiles released into the rivers of Venezuela's Llanos, or Great Plains, takes place on a private reserve about six hours drive from the capital Caracas.

Over the years, state-run national parks have proved ineffective at preserving wildlife and the task fell to private ranchers who kept reserves and created ecotourism lodges. 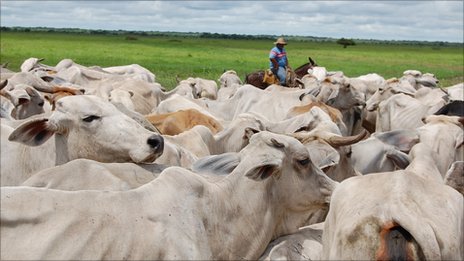 But now these reserves are an endangered species themselves.

Since 2006, three of the four farms which hosted biological research programmes have been expropriated by President Hugo Chavez's government, to the dismay of environmentalists.

"There is no way of knowing what is going on inside those farms now," says Mr Hernandez.

"At El Frio ranch, there was a crocodile breeding programme but we hear it is now closed and we don't know what is happening."

The expropriation of El Frio ranch was controversial. One of the biggest farms in the country, covering more than 60,000 hectares (nearly 150,000 acres), it was taken over by government troops in 2008.

It now goes by a different name - the Marisela Socialist Production Company. 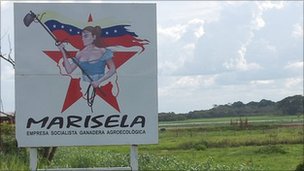 Agricultural production has diversified on this ranch, officials say

Large farms were traditionally the property of foreign investors or wealthy Venezuelan dynasties, often remaining in the hands of the same family for years.My requests for permission to visit the ranch went unanswered by the Ministry of Agriculture but the government says the site, once a huge cattle ranch, now produces rice, beans, sorghum and maize as well as meat.

That made them a natural target for President Chavez and his socialist Bolivarian Revolution which has a policy of redistribution of wealth.

There are no official figures on how much agricultural land has been expropriated since 2005. Some estimates put it at about 2m hectares (nearly 5m acres).

But those who have benefited are grateful.

"Thanks to God, the revolution and Hugo Chavez, we grow our own maize, rice, oranges and papaya," said Miguel Angel Tovar, a former shoe shop assistant who was given 15 hectares of land after the government expropriated a large cattle ranch from the British company The Vestey Group.

El Cedral, a 53,000 hectare ranch, keeps 90% of its land as a nature reserve while still raising cattle for meat and buffalo for dairy products.And at another expropriated farm, ecological programmes are continuing.

Its ecotourism lodge remains open and continues to attract bird watchers who come to see the more than 300 species found at the ranch.

"Food production here is done in a responsible way. The land isn't given over to crops, the cows are not injected with steroids, they eat grass, it's very natural," says local guide Ramon Arbuja. 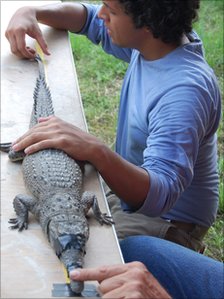 Attempting to show that preservation and production can live side by side, El Cedral is running a pilot programme alongside the Vietnamese government to investigate the use of fish as a pest control in rice paddies.

The approach at El Cedral seems to suggest that all is not lost for the wildlife of Los Llanos, but neither is its future guaranteed.

Crocodiles at an aquarium in Cheshire have been trained to obey the commands of their keepers. 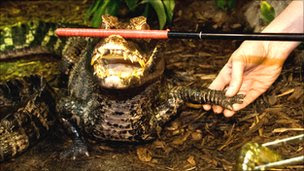 The Blue Planet Aquarium in Ellesmere Port said the two reptiles could open and close their mouths and hold out their front legs on demand.

The male and female cuvier's dwarf caimans have also been taught to respond to their names, to stay still and to return to the water, it added.

The training programme is based on a similar scheme in India.

Blue Planet Aquarium's Adam Mitchell said: "We are one of the very few places in the world that have trained our crocodilians. Not a lot of people do it.

"It enables us to move them and put them in transport crates and do medical procedures without having to restrain them, which would potentially stress them out.

"Plus handling a dangerous animal can also be dangerous for us."

The crocodiles, a male called Paleo and a female called Suchus, have been trained using a target stick which they associate with food.

"It is more or less the same thing that you would do with a domestic dog," Mr Mitchell explained.

"You associate a behaviour with a reward and that's exactly what we are doing with these guys. 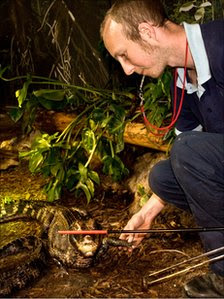 "They will follow the target wherever it goes, so we can safely move them, say into a box."

The training, which is based on a programme at the Madras Crocodile Trust in India, means the crocodiles can be examined without having to be handled.

"The stay stick enables us to do specific medical procedures such as check their feet and check underneath their tail.

"I also make them stand up on their hind legs, which does sound like a bit of a circus trick, but it is the best way to check there are no wounds on their undersides."

The cuvier's dwarf caimans are the smallest of the crocodilian species, growing to between 1.2m and 1.5m in length and can live to 40 years or more.

They are found throughout South America in freshwater habitats like rivers, flooded forests and lakes.

12 June 2011
SITTING comfortably like a normal seven-year-old would on a seesaw, Robert Irwin wasn't fazed by the 600kg beast underneath him. 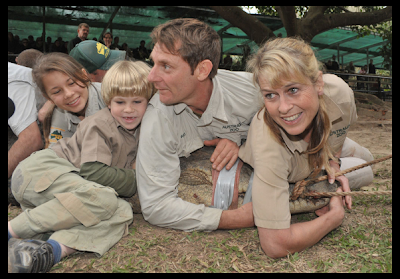 Not a strand of his signature blond bob moved out of place as he helped wrestle the prehistoric reptile.

It was the first time Agro the croc had been caught since it was brought to Australia Zoo in 1988.

Twenty-three years ago it was Robert's late father, Steve Irwin, who wrangled the reptile by himself in North Queensland, filming the entire thing with a sole camera atop a tripod.

Yesterday, as the Irwins moved Agro to a new enclosure, Robert told a film crew: “I now know why my dad called him Agro!”

But Robert wasn't scared at all.

“Well, you've actually got to hold the tail down so it doesn't actually move, because if the tail arches around that means he's getting ready to death roll.

“And if he death rolls around then you're in pretty big trouble.”

With mum Terri at the snout of the beast and sister Bindi holding his hand before they jumped on, Robert was in good company.

The Irwins, with Steve's best friend Wes Mannion and zoo staff, shifted Agro to a new home in front of a crowd of more than 100 yesterday.

As vets measured, tested and x-rayed the croc, Robert and Bindi joined their mum and Wes at the taped-up mouth for a normal Irwin family photo.

“It is amazing to be laying on top of a modern day dinosaur,” he told the Daily afterwards.

“They're related to an archosaur, which is really cool.”

Agro, often referred to as Steve's arch nemesis, grunted and rolled violently as he was pinned before 27 men finally carried him out of the enclosure in a metal box.

I have always had an affection for crocodylians.
I have no idea why,
I've been collecting all things croc/gator etc since about 1988 and have a very large collection.

This blog is a continuation of my obsession of all things crocodylian...

Jenn
I have been taking some time off work since Sept 2012, and am pursuing my dream of being with crocodiles. I am volunteering and traveling to places where I can spend time with crocs. I'm in love with crocodiles, crocodiles and crocodiles!

A small, but happy Nile croc!